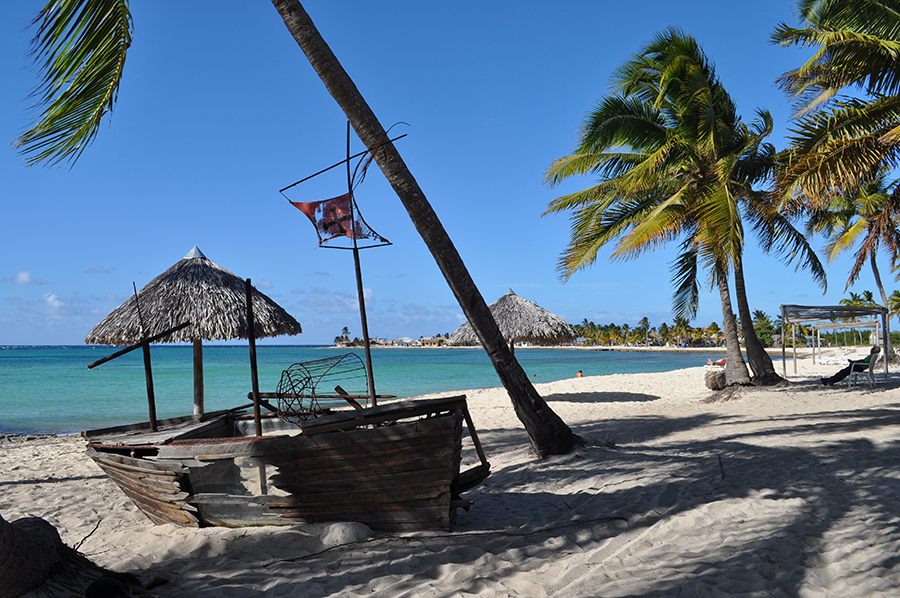 Isn’t it annoying that you can usually only enjoy the beach during the summer months? Depending on where you live in the world, the beach can be a bleak and empty place for much of the year. Sure you can still enjoy it in a way, but it’s more of a staring at the cold waves crashing onto the shore as you ponder the mysteries of life kind of way. There are some parts of the world where the beaches can be used all year round, and enjoyed in the right kind of way – the laying in the sun and enjoying a cold drink kind of way. Cuba’s proximity to the equator means that it’s always beach season. The locals might notice a slight change in temperature and might well refrain from swimming, but for many visitors, the Cuban winter will be warmer than their usual summer! Fortunately, many of the best beaches in Cuba are located in and around Havana, meaning that there’s never too far to travel. After a day of exploring the wonders of the Cuban capital, there’s nothing like hitting the beach for some much needed relaxation. So when the time comes for a day at the beach, what are some of the greatest Havana Cuba beaches?

The biggest and best known of all the Havana Cuba beaches, Playas del Este is actually a 9 km strip of stunning coast that contains a number of different beaches. It’s about 20 minutes from Havana when you take a taxi. Your best bet is to spend time on what is considered to be the main beach, Santa María del Mar. From June until August it can be tough finding enough empty sand to put down your towel, as it feels like one giant beach party. While it’s still part of Havana, it feels like an independent beach resort, and many visitors opt to stay in one of the hotels here, instead of in the city itself. The beach is actually at its loveliest in May and October, when the weather is still stunning, but the crowds are not so extreme.

At the other end of the spectrum is Playa Boca Ciega, a beach further along Playas del Este. It’s infinitely less crowded, and is popular with locals. It’s just a short distance along the coast from Santa María del Mar, but it feels like a different world. It’s less popular with foreign visitors, since it’s not as well developed as other sections of Playas del Este. But this also has its benefits, since there’s less noise and the surrounding restaurants and bars are less expensive. And you can continue along Playa Boca Ciega until you reach the delights of Playa Guanabo.

Also a place where the locals go to play is Playa Guanabo, another part of Playas del Este. Guanabo is a village on the outskirts of Havana, and you could easily spend a whole day here, exploring the village and spending time on the beach. The village is quite rustic and beautiful, and it’s surprising that more visitors don’t visit this little slice of heaven. When the sun goes down, you can certainly have a good night out in one of the bars in the village, but it’s far less of a party area than Santa María del Mar.

Playa Bacuranao is the closest beach to the city, so it’s great if you’re pressed for time. The main feature of this beach is the coral reef, and the water is generally filled with snorkelling enthusiasts. A large number of your fellow beach-goers will be Havana residents who wanted to spend a couple of hours at the beach after a long day. It’s maybe not as popular as other beaches on Playas del Este, since the sand doesn’t quite feel as smooth beneath your feet. It’s coarse and a little rocky, but this Havana Cuba beach is no less beautiful because of it.

Once you dive into the waters of Playa El Salado, you’ll notice a certain something. Sure, the water is refreshing and mild, and yet the water will taste different to other oceans. OK, so you’re not going to drink seawater, but some will go in your mouth and you’ll be aware of all the salt. Ocean currents off the coast of Cuba have resulted in a high level of salt along this particular beach, and the name even means “Salty Beach.” It’s great for your skin, making this one of the most remarkable Havana Cuba Beaches. It will take a little longer to reach Playa El Salado from Havana – around 30 minutes by car.

Do you need any additional information? Feel free to contact us!