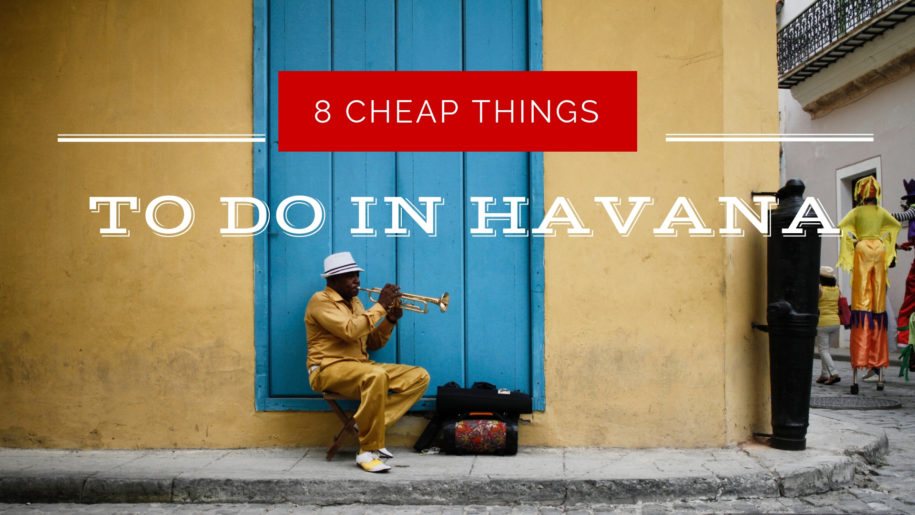 The huge wealth of attractions the Cuban capital has to
offer can have you scratching your head and wondering what to do in Havana for
a day. Even if you have a tight budget, there are plenty of sights to explore
and experience to be had, as we outline with our collation of the 8 cheap
things you should do on a day trip to Havana!

Toast the capital from a terrace bar

You don’t have to be staying at the famed Hotel Nacional to reap the benefits of its extraordinary history and it’s unmissable view overlooking the Malecon seafront promenade. Home to some the world’s most famous movie stars and some equally infamous American mafia characters prior to the revolution it then became the base for Fidel Castro and Che Guevara during the Cuban Missile Crisis before later returning to back into a hotel.  It’s main attraction today must surely be the terrace bar, which offers mojitos and other cocktails at very reasonable prices, and provides spectacular views over the Malecon, city and ocean.

Eat at a local paladar

Not only do these small paladares local restaurants offer great food, but some do it at incredible prices too. Owned and run by Havana residents in one of the few permitted methods of private enterprise, there’s nothing stopping you taking a seat and enjoying the freshly prepared local cuisine. They’re not always easy to spot at first, making them feel a little like hidden gems too.

Explore the wonders of Habana Vieja

Old Havana is the ancient heart of the Cuban capital that was founded by Spanish colonists by 1519. Over the intervening 500 years it has seen the construction of a stunning series of baroque and neoclassical buildings lining a beautiful array of plazas and other open spaces. Easily explored on foot, you’ll discover a hugely attractive and
photogenic city, with plenty of bars and restaurants in which to relax and watch the world go by. To get the most out of your walking tour, it’s definitely worth considering making use of a local guide, who expert knowledge will bring the capital alive.

Watch the ceremony of the La Cabana cannon

Cuba may not be the most punctual of countries, but every evening at 9pm – sharp – the fortress of Saint Charles, known as La Cabana locally, initiates the ceremony of el canonazo de las neuve. Positioned on the high ground at the entrance to Havana Harbour, visit the fort at this time and you’ll find soldiers dressed in eighteenth century uniforms preparing the cannon for the firing, which was traditionally used to mark the closing of the city’s gates each night.

Sea wall and waterfront promenade, the Malecon stretches from Old Havana to the upper-class residential neighbourhood of Vedado. The capital’s iconic fleet of 1950s classic cars rumble up and down, and street vendors do their best to tempt you into buying their street food. Far more than just an ordinary street, the Malecon is an important meeting place – somewhere Havana’s residents come in the warm evenings for exercise, gossip, and burgeoning romance! You can’t come to understand Havana without an evening on the Malecon!

Enjoy the music of the streets

Music is an integral part of Havana life – you’ll find many residents walking around the city with a transistor radio clutched in their hands as they do so. Music is therefore not hard to find! In Habana Vieja you’ll be hard pushed to find a street corner without a solo singer or small band knocking out stunning rhythms without effort. Most bars and restaurants in the city will also have live music come evening (often with CDs for sale too), so it’s incredibly easy to find your feet tapping to the local beat.

Cuba’s communist regime has placed a huge emphasis on the importance of culture – think of the likes of Buena Vista Social Club or ballet dancer Carlos Acosta. Havana’s museums are also an important part of the capital’s cultural life, and should certainly be on any list of what to do in Havana for the day. The Museo Nacional de Bellas Artes holds a wide-ranging collection of artworks dating from colonial times right up to the present day. Meanwhile, the Museo de la Revolucion in the old presidential palace is the place to head to learn the history of the Cuban Revolution.

Unravel the history of Cuban cigars

Widely considered the best in the world, cigars are a part of life in Havana, with everyone from old grannies to business executives chewing on and smoking the pungent local product. Discover how cigars are made by taking a tour of the Partagas cigar factory, one of the oldest and largest factories in the capital. Still made almost entirely by hand from tobacco leaves grown elsewhere on the island, guides will explain how different proportions of the leaves create alternative scents for different brands. The nimble fingers of the workers are sure to impress even if you’re not a smoker yourself, while if you are, for fancy giving a Cuban cigar a try, there’s an
onsite shop where you can purchase the factories products. You can book the tour from the concierge of your hotel, or from the tourist information offices, such as that at the Saratoga Hotel.

What to do in Havana for the day?

The question of what to do in Havana for the day is not one that results from a lack of things to do, but because of the incredible array of options available to visitors to the capital. We’ve brought together our top 8 cheap things you should do, so whatever your budget, you can get the very best of this unique Caribbean destination!