The Best Cities in Cuba for Tourists 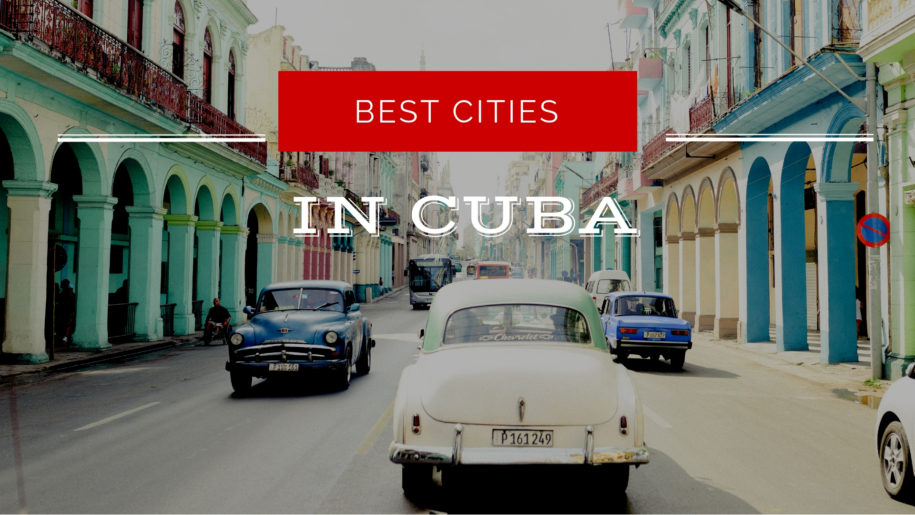 As the largest nation in the Caribbean, with a colonial history that dates back half a millennium, Cuba has many a beguiling town and city worthy of exploring. Which are the best cities in Cuba for tourists, and why? We give you the lowdown using our extensive local knowledge of all Cuba has to offer!

No trip to Cuba is complete without some time in the national capital, and you’re sure to find yourself in Havana if only in making your way to or from the international airport. For sightseeing purposes, the centre of the action is the neighbourhood known as Habana Vieja – Old Havana. The most ancient part of the city, dating back to the earliest days of Spanish colonial rule in the city, this UNESCO-listed World Heritage Site has almost endless attractions both old and new. From centuries-old forts to the Museo de la Revolucion, which retells the history of Castro’s successful communist uprising, attractions abound. Be sure to spend time in the shady squares that are interlinked by the city’s oldest of streets watching the world go by, and head towards the Malecon sea promenade come evening to see what makes the capital tick.

In many ways, Vinales couldn’t be more different from Havana. Where one is a bustling metropolis of different neighbourhoods, roaring engines, and revolutionary propaganda, the other is a verdant Eden of fantastic landscapes that takes visitors back to the days when farming was one of the island’s primary occupations, be that sugar cane, tobacco, or food crops. Here you’ll find the drying houses of the tobacco leaves that are later rolled into the country’s famed cigar exports, as well as the unusual landscape of bare limestone magotes hills that erupt out of the lush greenery. The town’s traditional feel has managed to survive the onslaught of the twenty-first century, and Vinales remains a place where spending time with neighbours and friends is high on the list of things to do. What makes Vinales one of the best cities in Cuba for tourists? It has to be the combination of traditional hospitality and expansive countryside that welcomes hikers, cyclists, and cavers too!

In the opposite direction from Vinales, four to five hours roughly east of Havana, Trinidad is also certainly one of the best cities in Cuba for tourists. One of the best-preserved colonial-era cities anywhere on the island (which is really saying something!) Trinidad is one of the earliest settlements founded after the arrival of the Spanish in the 1500s. Oozing history, the cobblestoned streets are lined with grandiose architectural gems well worth exploring with a good pair of walking shoes in tow. But you should also take your walking boots to Trinidad in order to head out on one of the surrounding hiking trails, while horse riding is another popular attraction for tourists. Truly spoilt for choice, Topes de Collantes National Park offers visitors an amazing mix of misty mountain tops, tumbling waterfalls, and a huge variety of bird life. Alternatively, the Valle de los Ingenios – or the Valley of the Sugar Mills, blends history with agriculture, with various remains from the time when this area was the prime producer of sugar cane in the country.

Santa Clara is a must for anyone interested in the revolution that overthrew the Cuban dictator Batista and brought Fidel Castro to power in the late 1950s. Here you’ll find a seven metre tall bronze statue of fellow revolutionary Ernesto Che Guevara overlooking the city from a nearby hill top. It marks the site of the Che Guevara Mausoleum and Museum, where the remains of ‘El Che’ were interred after they were discovered in Bolivia in the 1990s, having been lost for decades. The city also holds some important revolutionary relics, such as a military supply train sent by Batista to reinforce his troops and derailed by Guevara’s forces. This is often seen as a turning point in the revolution and is therefore an important historical point of interest whatever your political views.

You can’t get much further from Havana than Santiago de Cuba, situated in the far east of the country. Its distance from the capital means it remains one of the most authentically Cuban cities anywhere on the island. The nation’s first colonial capital, Santiago’s streets have an intriguing blend of cultures, the result of Spanish, West African, French, and British immigrants arriving in the city and calling it home. In more recent times, Santiago witnessed the first shots fired in anger during what became the revolution, and the balcony of the city hall was where Castro stood and declared the revolutionaries victorious. You can pay your respects to him in the city’s Santa Ifigenia cemetery, where a changing of the guard ceremony takes place every half an hour.

While you can’t get much further from Havana then Santiago de Cuba, it is possible, in which case you’ll find yourself in Baracoa. While many tours of the island miss out Baracoa, we think it is another of the best cities in Cuba for tourists. The site of Christopher Columbus’ first landing in Cuba, it has largely managed to retain its natural tropical setting, and is often touted as the greenest city in Cuba. The mountains that have meant Baracoa has been relatively isolated from the rest of the island until recently are dotted with a fantastic number of plants and flowers, including cocoa and banana that sweep down to the banks of the river, while fortifications dating back to the nineteenth century are also worth some time.

Best cities in Cuba for tourists

Cuba’s cities are more than just a sum of their major attractions, and we’ve picked out these cities as the best cities in Cuba for tourists not only for their sights but also their ambience and authenticity. We wish you a great time in Cuba!