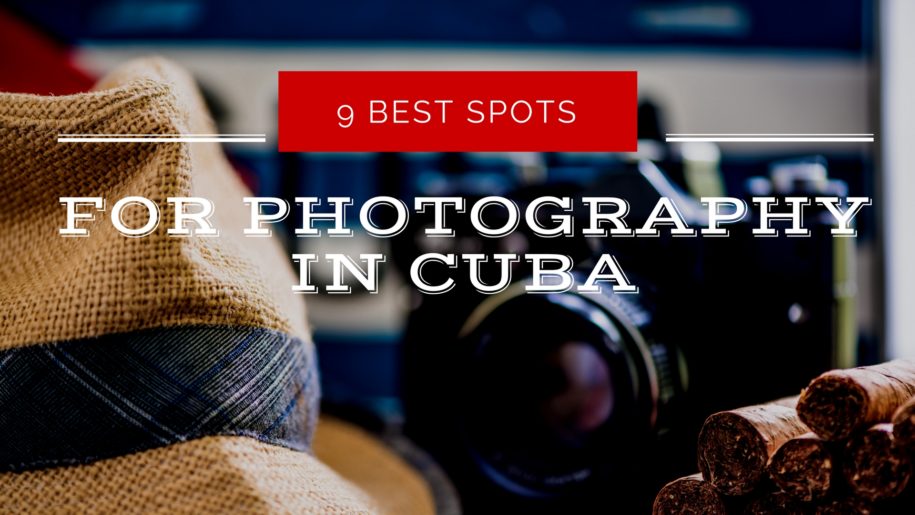 Posted by Daniel Stretton on September 20, 2017 | Featured | No Comments

How many holiday photos do you tend to take? Digital photography has made it so much easier, hasn’t it? The gratification can be immediate, and this is vastly different to the dark old days (which OK, weren’t all that long ago) when you needed to wait to have the film developed before you knew what your photos would look like. Even digital cameras are becoming a rarity, and most smartphones have an impressively capable camera – just point and click.

The average smartphone also allows you to play with the shot, doing some basic retouching until it’s instagram ready. And then there are those glorious holiday destinations where the scenery is so sublime, and the light illuminates the land in a way that lends itself to a darn near perfect photo. Photography in Cuba can be like this, and those who see the photos might accuse you of some intensive retouching. You might be forced to deny it, but you’ll know that the reality was so stunning that no retouching was needed.

There are quite literally countless sensational spots for photography in Cuba, but the capital city is home to 9 of the best.

Photography in Cuba might make you think of sun-drenched beaches and bulkily stylish vintage cars sedately prowling the streets. You might not think of a naked woman riding a giant rooster while grasping a huge dining fork. This is a statue known as Viaje Fantástico and can be found in Plaza Vieja in La Habana Vieja (Havana’s Old Town). It’s an excellent choice for a photography subject in that the setting is undeniably Havana, since the plaza is bordered by those grand, garishly-painted buildings that the city is famed for. And then there is the oddity of the statue itself, exemplifying the unique feeling of contemporary Cuba.

You’ll find Jaimanitas on the outskirts of Havana, and it’s a place that will boggle the mind. Artist Jose Fuster moved here in 1975 and set about transforming his home and studio with folk art in vibrant colours, embellished with small statues and installations. He did the same to his neighbour’s homes, and so on, and so on. Whole streets of the neighbourhood look like an art gallery has spilled onto the streets and it evokes a childlike sense of wonder that your camera will devour.

3. Watching Over You: Colina Lenin

Also on the outskirts of Havana, there’s a site in Regla that offers one of the oddest places for photography in Cuba. A bronze sculpture of Lenin’s face has been built into a hill, with 12 human size white figures on the ground, reaching up to him in awe. It’s a camera-worthy spot, and is somewhere that many of your friends who went to Cuba will have neglected to visit.

4. The Glamour of Photography in Cuba: Hotel Nacional

The Hotel Nacional de Cuba was once the opulent playground of the rich and the famous. Mobsters rubbed shoulders with the elite of old Hollywood in an art deco setting. This magnificent building is located on the Malecón, the esplanade that stretches along the waterfront in Havana. Try to take a photo as the sun goes down, bathing the building in golden light.

5. A Slice of Life: Calle Obispo

This street in Havana’s Old Town offers a typical slice of life for the capital. You’ll wander, you’ll take many a photo, you’ll find somewhere for a cold drink so you can sit and watch the world go by. It’s frequented by tourists and yet this doesn’t make it any less authentic.

Did you know that Fidel Castro was a fan of The Beatles? While their music was once frowned upon in Cuba, things changed (as they have a tendency to do), and so the John Lennon Park was unveiled in central Havana. It’s one of the more tourist-centric places for photography in Cuba, and you’ll want to sit on the bench next to the life sized statue of Lennon for a selfie. The statue used to have glasses, but these were frequently ripped off as a souvenir. Not to worry. The park’s security guard keeps a pair which can be perched on the statue if you want to complete Lennon’s look for your photo.

Yes, it is the final resting place for more than a million former residents of Havana, but the Colon Cemetery is also a destination it its own right. It’s a marked difference from graveyards in many parts of the world, and the lavish tombs and monuments can be beautiful to behold. It’s something you’re bound to take numerous photos of, but remember that it is an actual working cemetery and so it’s not exactly appropriate to take happy selfies while a funeral is in progress

Once the Malecón reaches Vedado, you’ll come to Calle 23, which leads away from the water. Like Calle Obispo, the street offers a slice of Cuban life, but it’s different in that this is the starting point for many Havana residents on their nights out. Watch the people go by as the sun starts to go down, and take a few photos. It’s common to actually sit on the street for a few cold beers before venturing onto one of the many bars and clubs on and around the street.

Morro Fortress sits at the entrance to Havana’s harbour and was built to defend the city against pirates, and the British, and the French, and all the rather large number of groups who wanted to pillage and/or claim the city. The fortress itself makes for some stunning photos, and is both austere and imposing. The truly great photo opportunity here is when you look back at the city, taking in the panoramic view. Perhaps this will be the best all-encompassing photo spot in the city that you’ll encounter.

A Cuba photography tour is always a great option if you are looking to capture parts of Cuba, away from the guide books.