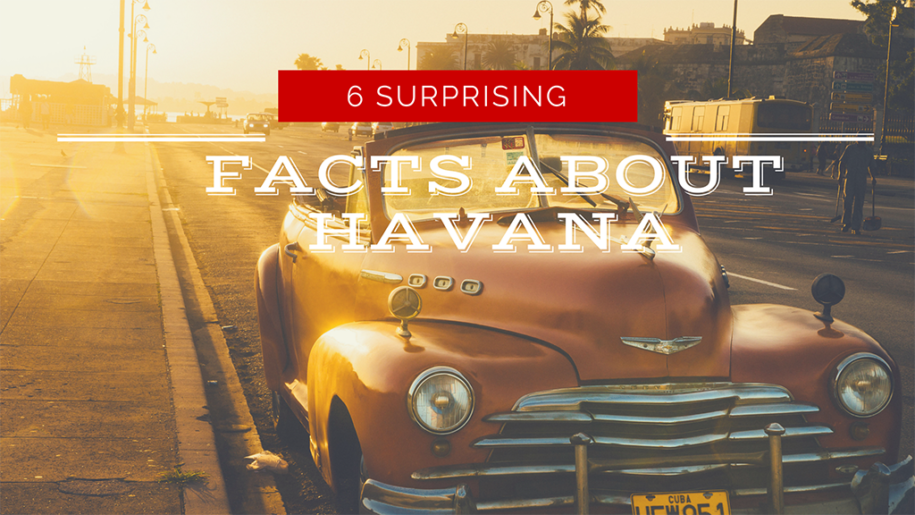 Havana is a city so full of life. There’s a brightness here, which is partially due to the fact that the city is bathed in magnificent sunshine for most of the time. But the brightness is also due to other factors – the genuine warmth of the locals, and the pulsating music everywhere. Havana manages to be a bustling (yet entirely manageable) metropolis, as well as being wonderfully laid back. There’s so much to see and do, and you can have an exciting adventure by just taking a stroll. The guidebooks are full of useful facts about Havana, and yet there are a few things that you might not know about this sensational city. There’s so much more to Havana than rum, cigars, and Castro.

1. Havana: Such a British City

While it is now uniquely Cuban, Havana was of course once a Spanish territory. It’s one of the lesser known facts about Havana, but did you know that the city was once (briefly) a British territory? France, Spain and Britain were some of the main participants in the Seven Years’ War (1754 – 1763), and the British captured Havana in June 1762. They held it for less than a year, before trading it back to the Spanish in exchange for Spanish territories in what is now Florida. It’s weird to think that Cuba could have easily become part of the British Commonwealth.

2. Actual Pirates (Who Happened to Be in the Caribbean)

One of the most interesting facts about Havana is the city’s turbulent history. There were all the nations that tried to conquer the city, not to mention the fairly frequent pirate attacks. The Pirates of the Caribbean might now be a series of Disney movies, but at one point actual pirates of the Caribbean were a real threat. To defend the city against pirates and unfriendly foreign forces, a truly daunting fort was constructed. The Castillo de la Real Fuerza is an imposing sight to see, perched above Havana’s harbour. It was finished in 1577 and has protected the city on countless occasions… Although it was sometimes unsuccessful. Those darn Brits.

3. Its Nickname Is One of the Nicest Facts About Havana

Some cities have beautiful nicknames. Los Angeles is the City of Angels. Paris is the City of Lights. Some cities gave rather unfortunate nicknames. Edinburgh’s is “Auld Reekie” (Old Reeky) – because the old city used to reek of smoke and other less than delightful scents. Havana has a rather gorgeous nickname: Ciudad de las Columnas, or the City of Columns. This name will seem rather obvious when you walk around Havana and note the glorious colonial architecture, which yes, features a lot of (beautiful) columns.

When you visit Havana’s Parque Central, you should take a moment to think about one of the strangest facts about Havana. It was from this point that Matias Perez ascended to the sky, never to be seen again. Perez was a hot air balloonist who made only one flight before his second (and final). It was quite windy on June 29, 1856. Perez decided to wait until the wind settled down, and by 7pm he thought conditions were more favourable. He was wrong. His balloon went up, and Perez was never seen again.

5. From Rum to Bureaucracy

One of the most beautiful buildings in Havana is the former Bacardi Building. We say former, because an interesting fact about Havana is that the Bacardi family fled the city in the aftermath of the Cuban Revolution, taking their rum producing operations with them. This amazingly gorgeous art deco building was completed in 1930 and even has a bell tower at its peak. Private enterprises (and assets) were seized by the state after the revolution, so the Bacardi’s swiftly left the city, leaving their lovely building behind. Its new purpose (as government offices) was somewhat less exciting, but wouldn’t it be nice to go to work somewhere so beautiful?

6. Imagine All the Cuban People…

While you peruse maps of Havana and plan where to visit, you might notice John Lennon Park, located in the district of Vedado. No, the Beatle didn’t happen to share his name with some obscure Cuban revolutionary, and the park is in fact named in his honour (Fidel Castro was a fan). There’s a lifesize statue of Lennon sitting on a bench in the park, although the poor man’s glasses have been stolen by vandals so many times that they were finally not replaced. There’s often a security guard or groundskeeper watching over the statue, and they usually have a pair of glasses to put on the statue if you want to take a photo. Let’s just hope that Castro isn’t a fan of Justin Bieber, otherwise there will be some rather annoying statues in Havana’s parks in the years to come…

Tour Havana with us and see the best the Capital City has to offer! Discover Havana’s secrets by exploring its crumbling colonial buildings and learn about its revolutionary past.