The Ernest Hemingway House in Cuba: Follow in His Footsteps

It’s interesting how what was once popular mainstream literature can take on a classical reputation with the passage of time. This is not the case with each and every popular writer, so hopefully (pray for it) that book claiming to be about 50 shades of naughtiness will never, ever been seen in the classics section of a bookstore. Assuming they still have bookstores in the future, that is (pray for that too). Ernest Hemingway was an undeniably bestselling writer while at the peak of his creativity, although his literary acclaim was not something bestowed upon him after his death (he won the Pulitzer Prize during his lifetime for The Old Man and the Sea in 1953).

It’s entirely feasible that today’s literary elite will still be well-regarded for generations to come, whereas 50 Shades will hopefully be recycled into toilet paper. Hemingway was a true American man’s man, but he was also associated with other countries, which partially claimed him as his own.

This was true of his work written in Spain during the Spanish Civil War, and is even more true of Cuba, for whom he’s an adopted son arguably up there with Che Guevara. The Ernest Hemingway house in Cuba was his home for decades, right up until he left Cuba in 1960, the year before he died. If you’re a fan of Hemingway, it’s an utterly fascinating insight into the writer’s life and his creative process. And even if you’re not, it’s an interesting view of how a writer was shaped by his adopted home. And the house and gardens are so incredibly beautiful.

Hemingway in Cuba: The Early Years 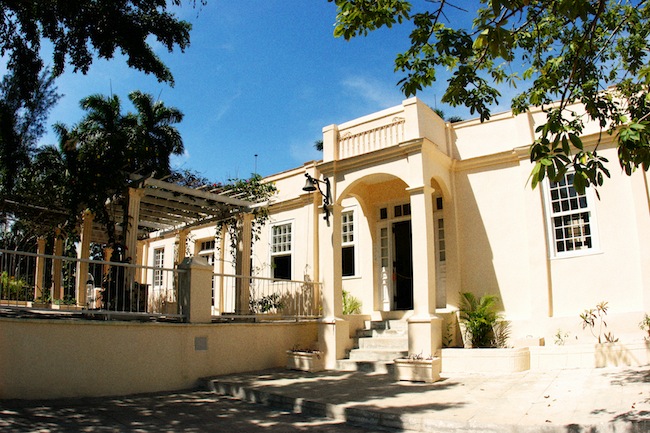 Like many arrivals in a new city, Ernest Hemingway lived in more modest accommodation before finding his dream home. In a typically literary fashion, this was a long term residency in a hotel in the heart of Havana. For seven years from 1932, Hemingway called the Hotel Ambos Mundos home. Back then it was a fairly new establishment (it opened in 1925), and Hemingway would diligently write at his desk before making his way downstairs to partake in the pleasures of the city (because after all, Hemingway was a legendary drinker). If you had any grand plans to directly emulate Hemingway and write your own great novel while staying at the hotel, you might wish to rethink.

The prices have gone up somewhat since Hemingway’s days (he paid around $1.50 per night), and the hotel has rather unsurprisingly capitalised on the fame of its former resident. His old room (room 511 on the top floor) is not available for accommodation, and is now a small museum dedicated to Hemingway’s life and work. So even staying in an adjacent room, you might not be able to concentrate on your writing with all the people wandering in and out of room 511. The hotel can be found on Calle Obispo (number 153).

To further follow in Hemingway’s footsteps in Havana, you’ll need to take a short stroll further along Calle Obispo to drink in what was considered to be Hemingway’s favourite bar in the city (although it might be the case that he couldn’t be bothered walking too far for a cocktail). El Floridita is a charming little bar, although in all honesty it’s another place that has capitalised on Hemingway’s name and has become somewhat of a tourist magnet. It’s worth checking out, although you should perhaps make it a choice for an afternoon drink as opposed to your venue for the evening so you don’t have to fight the crowds. El Floridita has gone as far as installing a life sized statue of Hemingway standing at the bar, just in case there was any confusion about where the writer liked to drink.

Welcome to the Ernest Hemingway House in Cuba

He moved straight from the hotel into the home, in preparation for his marriage to the writer Martha Gellhorn the following year. He rented it for the first year before buying it, and it would be his for the next 20 years (even though the marriage would last for just over 10 years). Most famously, Hemingway wrote The Old Man and the Sea while living at Finca Vigía. It’s not some sprawling estate, and the house itself is relatively compact, though obviously lavish in parts. It’s not as though most homes have a small tower out the back, but this is the case with the Ernest Hemingway house in Cuba. Hemingway left Cuba for the final time in 1960 and died by his own hand the following year.

The House in Recent Years

Many foreign owned properties in Cuba were seized in the years following the revolution, and Finca Vigía was not immune from this. There is some debate as to what happened next. The Cuban authorities said that the house and its contents were gifted to them, whereas Mary Hemingway (his wife following his divorce from Martha Gellhorn) said the home was simply claimed. It was kept in a rather sorry state for a number of decades and at one stage it was reported to be in danger of actually collapsing.

The significance of the home had always been acknowledged, and this eventually led to funds being awarded to restore the Ernest Hemingway house in Cuba to the state it was in when Hemingway actually lived there. It was in fact was only opened as a museum in 2007 after some fairly extensive restoration work. The property is simply stunning to behold, and would be so even without its place in literary history.